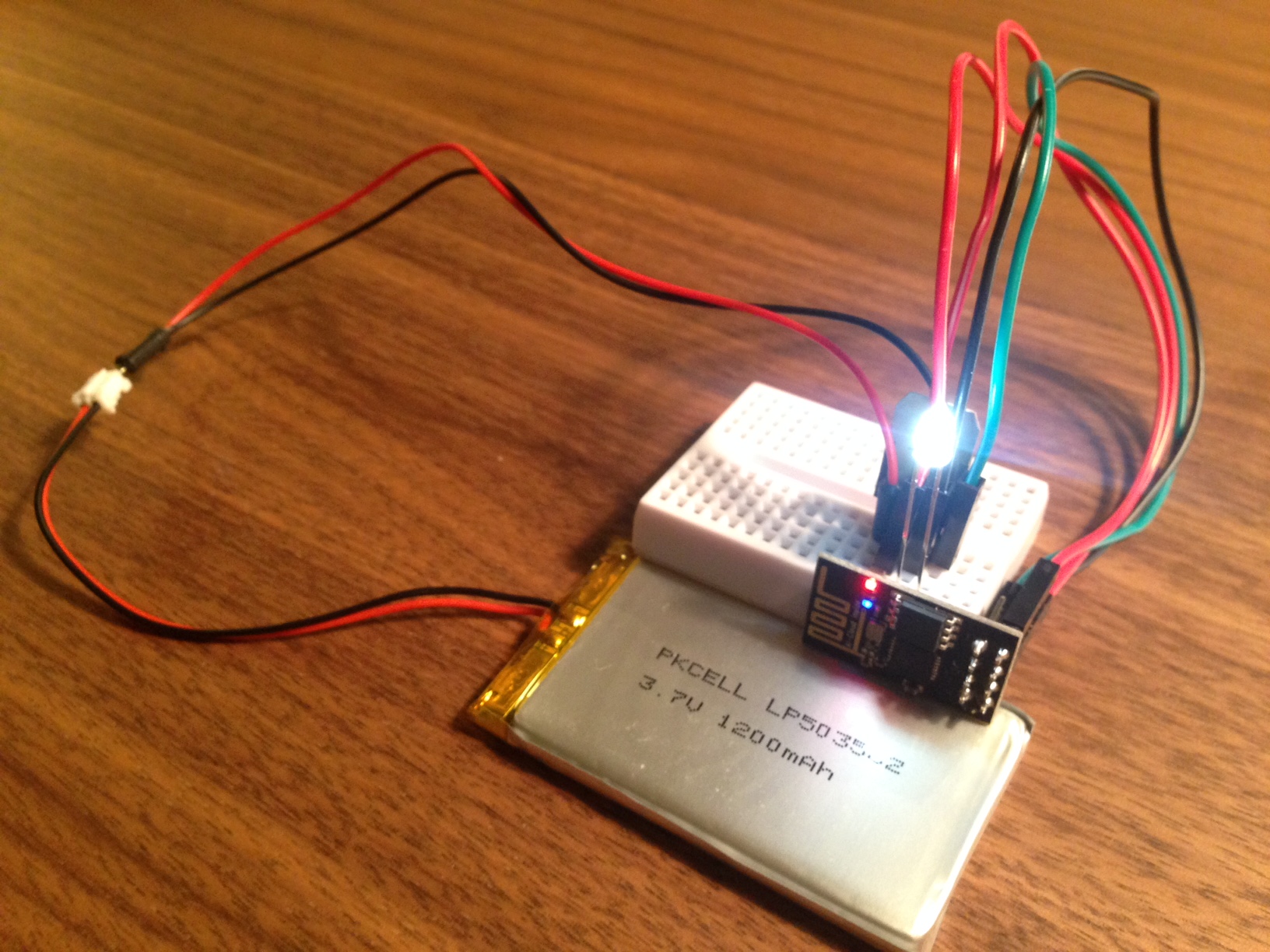 In my previous post, I covered how to upload sketches using NodeMCU, which is firmware written in Lua. I ran into a few problems:

In comes Arduino to save the day. There are a lot of useful libraries written for Arduino--libraries for stepper motors and parsing JSON for example. Also, the stepper motors are controlled by Arduino's microcontroller in the end, so it is just simpler to have one language write for both the Wifi Module (ESP) and the microcontroller (Arduino). Last, no upload errors (that weren't my fault). 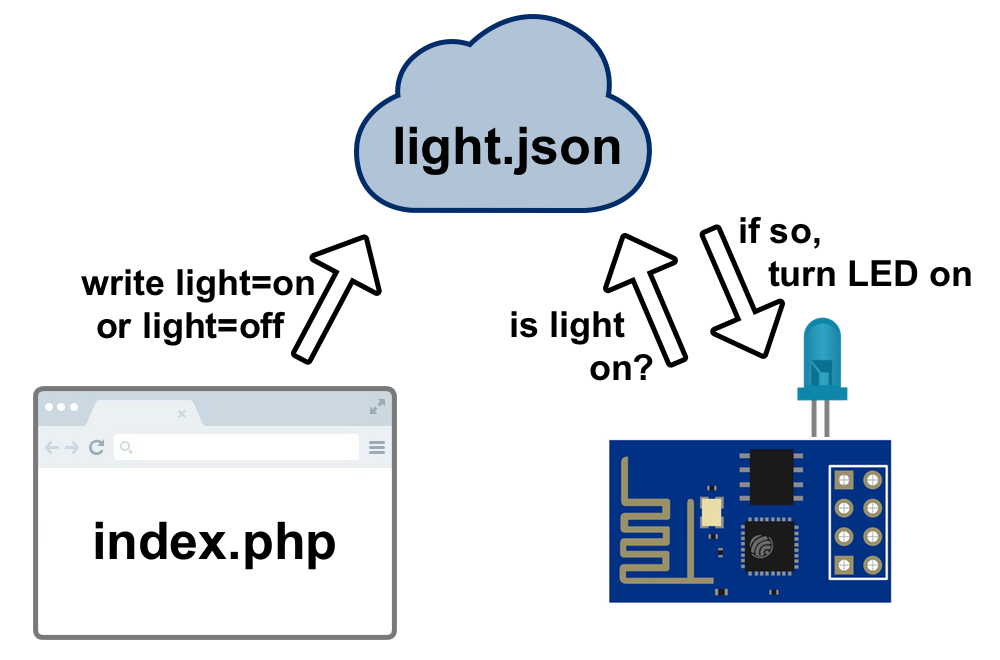 If you want to poke around the code, all the code/schematics I describe in this blog post can be found on this project's GitHub Page.

Parts One: Get Yo Stuff

This project requires the following ingredients: 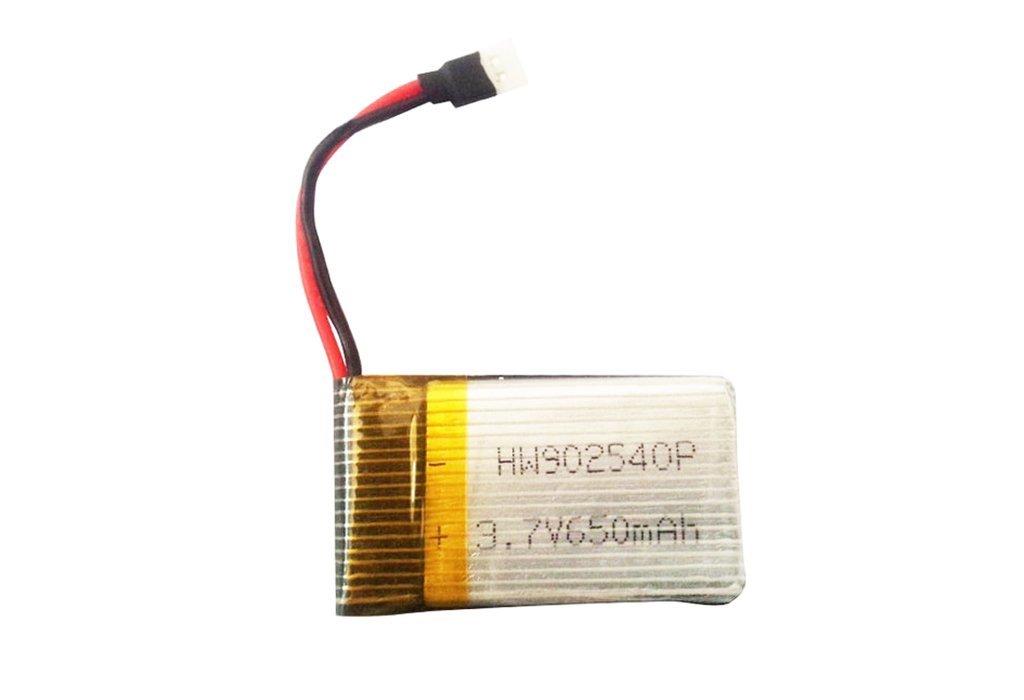 One note. Hehe. I didn't use regulators for this project. The LiPo Battery I'm using is 3.7V and the ESP8266 take 3.3V, so I guess it's not THAT bad. But you should use regulators! At least that's what my friends who electronics tell me. You can find some nice 3.3V Regulators on Adafruit.

The index.php file is the public file that writes {"light":"on"} or {"light":"off"} to light.json. Here is the barebones code. There are two links that links you to the current page with a url parameter ?light=on or ?light=off. Based on the url parameter, the PHP writes the appropriate instructions to the JSON file.

I merged this code into my handy template.html HTML page to start. This page is preloaded with jQuery, Bootstrap (with simple layout preloaded), and Font Awesome. I don't use jQuery or Font Awesome on this particular project. Then I added some styling classes (e.g. btn-large and styling divs to make things response, pretty, and all that good stuff).

Here's the final code for index.php:

Part THREE: Hardware: Wire Everything Up

Now that code is written, go ahead and wire things up. To do this I used an FTDI to USB cable. The FTDI cable powers the ESP and connects it to the Serial Terminal. Of course, you can also use FTDI Friend or other FTDI connectors. Here is a diagram of the ESP connected to an LED and an FTDI friend from Sparkfun. 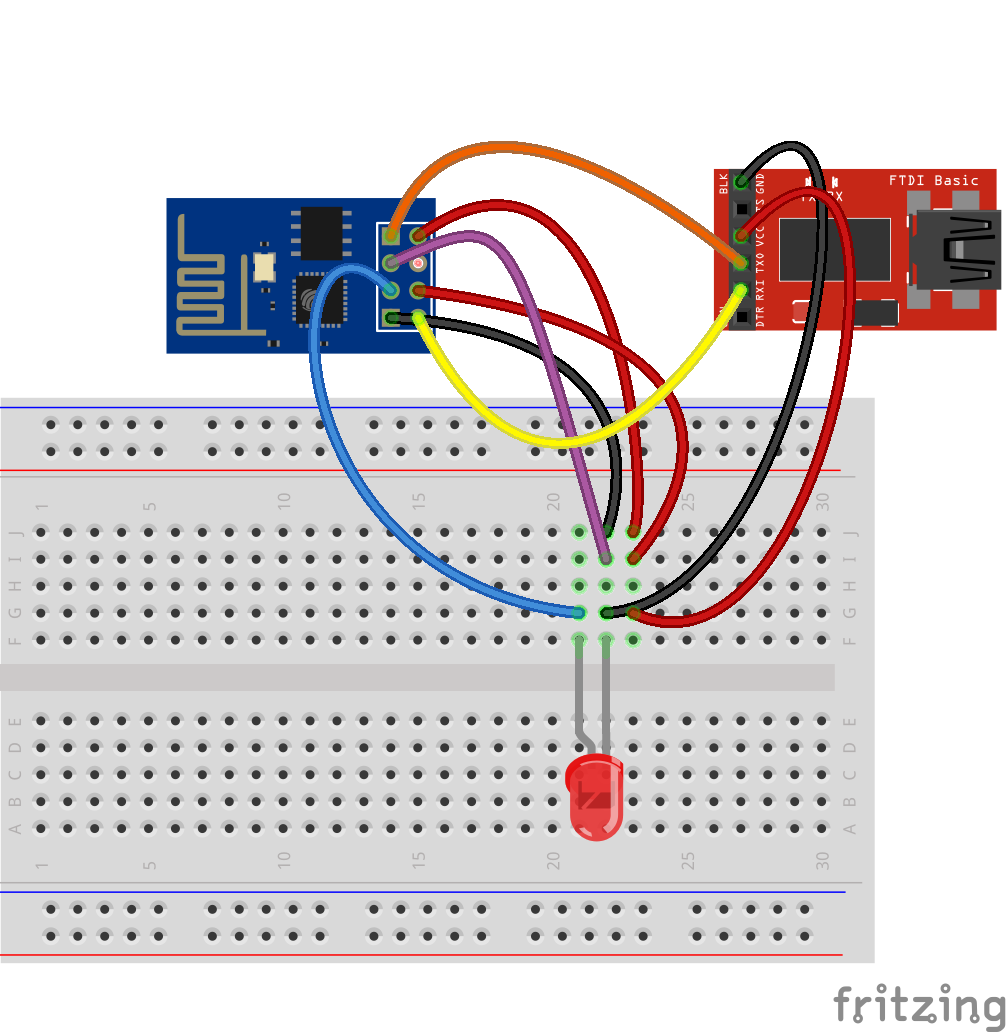 Now, when GPIO0 (the purple wire above) is connected to ground at boot, this tells the ESP to start up in bootloader mode. This is when you can flash the ESP, meaning transfer the Arduino code to the ESP. After the Arduino code is loaded, you'll see a "Done Uploading" status message at the bottom of the ArduinoIDE. Then the code will start running.

If you want to flash another program, then restart the Arduino. You can unplug/replug the USB (which disconnects the Arduino's power source), or you can reset the Arduino by disconnecting the CH_PD (chip powerdown) pin.

If you don't want to restart the device in bootloader mode, simply unplug the GPIO0 cable (the purple wire above).

When are you ready to not rely on the USB cable anymore, just unplug everything that connects to the USB. You can also unplug the GPIO to Ground, since you don't need the bootloader mode anymore. You then connect the VCC (power) and GND (ground) to the red (power) and black (ground) of a battery pack that's 3.3-5V. Something like this: 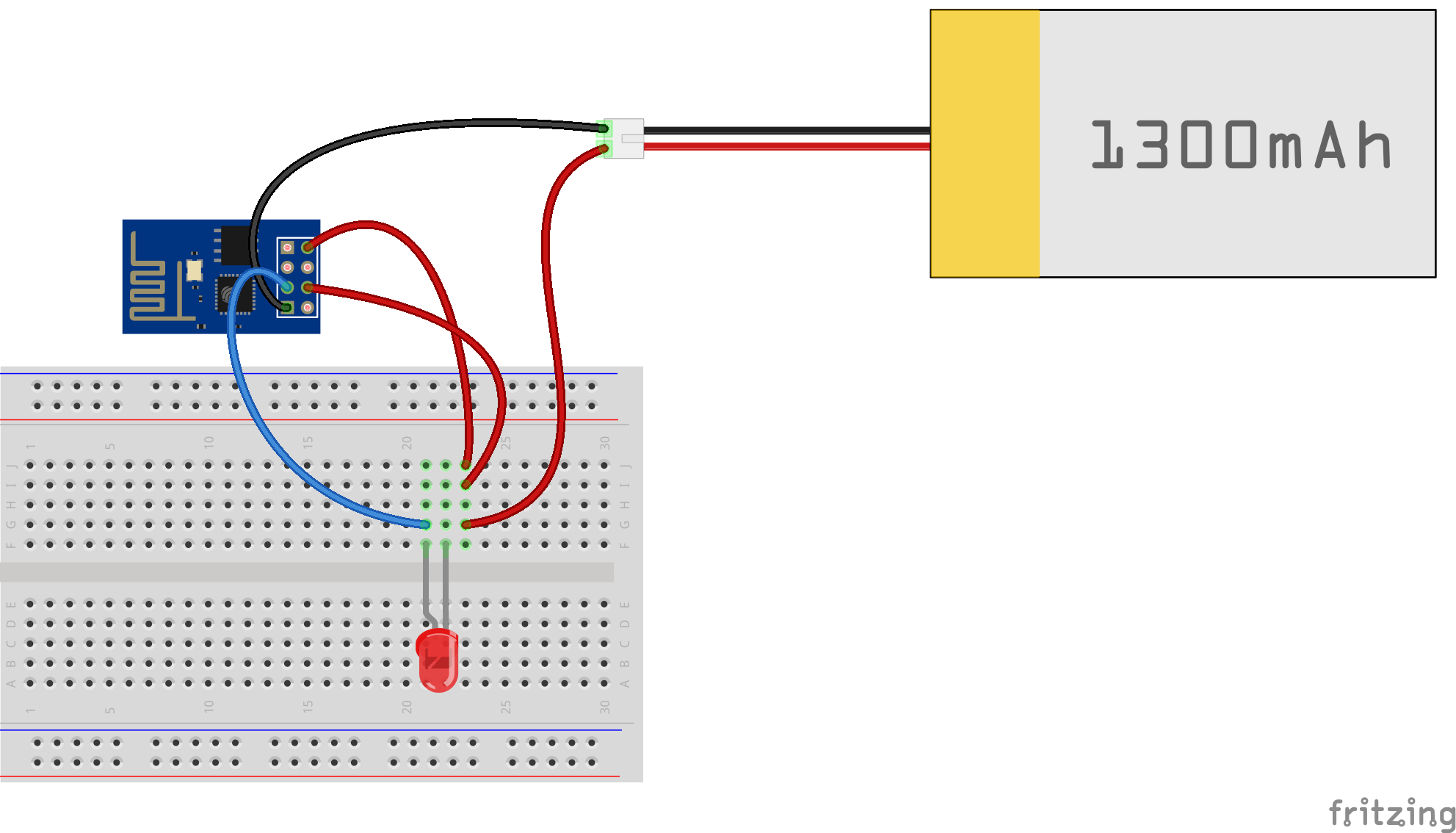 I used the ArduinoIDE to connect with the ESP8266 module. This way, you can flash the ESP just like you would flash an Arduino. It makes developing really easy!

Now, this does not mean you need an Arduino in this example. You are just using the software Arduino publishes which allows you to write program and flash them onto tiny little electronic modules like the many different types of Arduino board and now the ESP8266 module.

1. Install the ESP8266 package in ArduinoIDE

For this, you need Arduino 1.6.4 or higher. You can download the latest software on Arduino's website. I followed Adafruit's tutorial for setting up the Arduino IDE. They used their Huzzah breakout, where as I am using the lowly ESP8266-01. The software part is the same, the only difference as far as I can tell is which pins to plug into which socket in the FTDI cable.

After everything is updated, open up Preferences (on Mac it's CMD+, or select from the toolbar Arduino > Preferences). Then enter http://arduino.esp8266.com/package_esp8266com_index.json under "Additional Board Manager's URL" towards the bottom.

Now, in Arduino, you should file under toolbar Tools > Board > Generic ESP8266 Module.

I also followed Adafruit's recommendations on a few other settings:

Ok, now that ArduinoJson is installed, the we can start doing the fun stuff. I’m going to start off by showing the compiled code. Then I’ll break it down. If you are the type that like to stare at code and learn that way, then just read the following and you’re done! If not, keep going.

Now, light.json outputs its value using JSON. So we need a parser. Luckily, a bunch of really smart people have already done this. So no need to reinvent the wheel. I used ArduinoJson. You can find instructions for installing ArduinoJson library on their wiki.

Then you include this library with #include <ArduinoJson.h> in the file.

In this section, you set a few basic configurations set to your specific values:

In void setup(), you set GPIO2 pin to Output (the O part of GPIO) and I like to flash it on High just to show that it’s turning on.

You also begin a Serial connection using Serial.begin(115200). This enables you to interact with it using the Serial port, which you can open with the little Magnifying glass in the top left corner of the Arduino IDE. You can also connect to the Serial Terminal using screen, CoolTerm, or PuTTY. I covered different options in a previous blog post. When you use Serial.print("something") or Serial.println("something"), you should see the results in the Serial Terminal.

Last we start connecting to the internets using Wifi.begin(ssid, password). While the ESP is still connecting, I have it delay and then print a dot. If you are watching the Serial Terminal, you’ll see dots appear until you log in. It’s just a way to see that the little ESP is trying to connect.

Next we start the void loop() function, which Arduino will run and rerun. Here, we will connect to light.json and print the HTTP response (the info you get from the URL).

Now that’s all fine and dandy, but we don’t want to see the HTTP response. We want to turn on an LED! So let’s do that now.

So when you run that, you should get something like this as a response. You can see the log of the response in your Serial Terminal.

The first section is the HTTP Response header. It tells you what kind of data you’re getting using application/json, that the webpage is up and running using 200 OK, and other useful, informative things.

The next section after the blank line represents the body of the content. On a web browser, this is the stuff that you see.

Ultimately for the blinky LED, we only care about the last line ({"light":"off"}), which tells the ESP8266 what to do with the LED.

If you have a data response with a different structure, this may not work for you. Ok. You’ve been warned. Now let’s continue.

Warning: crazy-silly-but-it-works hack up ahead.

What I do is introduce a variable name section. Using this, I keep track of what section of the HTTP response I'm reading.

The program then reads the HTTP response line by line. Each line is represented by the variable line in the while loop. The default value is section = "header" since the HTTP Response begins with header.

It then doesn’t change until it reaches an empty line. When it reach an empty line if (line=="\n") then the program sets section="json" since the next line will be the JSON line we care about.

We parse the JSON line next, and store the JSON into a json_parsed variable. You can read this in the section after the comments // Parse JSON.

After this, we turn the LED on or off depending on the result. We use the strcmp function (short for string comparison). strcmp(json_parsed["light"], "on") == 0), meaning if the the key light is set to on, then we turn on the LED. We do this using digitalWrite(pin, HIGH) line where the variable pin is the GPIO number we set in the beginning of the file.

The next thing I want to do is connect this whole contraption to a stepper motor. So rather than an LED blinking on and off, the ESP can make a motor turn.

I want to have a bunch of little ESPs around the house connected to different motors that can do different things. I mean, a lot of things require turning action: opening window blinds, turning a key, opening a door. My next step is to get a basic motor example working, then we’ll connect the motors to various household components and start robotifying my apartment.